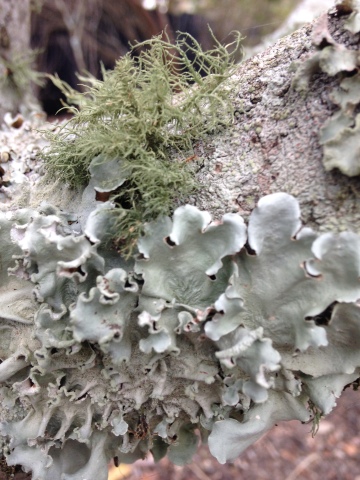 Lichens growing on a melaleuca branch.

At this time of the year in the Northern Rivers area of New South Wales where I live, the paperbarks or melaleucas, are shedding their bark. The soft texture and muted colours of the bark are gorgeous and once shredded, it makes great mulch for the garden.

I discovered that ‘Melaleuca is a genus of around 170 species in the Myrtle family (Myrtaceae) …The majority of species are endemic to Australia but several occur to the north [in places such as] Indonesia, New Guinea, New Caledonia, Malaysia.’ They are tough, drought and fire hardy trees usually found in swampy areas and along watercourses in open forests and woodland. They abound in the parks and gardens in my area. Related to the bottle-brush or callistemon genus, paperbarks share the same brush-like flowers so irresistible to Australian nectar eating birds like the Rainbow Lorikeet.

Creamy brush-like flowers of the paperbark

Most appealing to us when we were small, was the paper-like bark which we peeled off in large sheets from the trunks. The flaky layers were too soft to write on unless you used charcoal, but bugs of all kinds hid beneath and wrote their squiggly stories on the smooth fragrant underside

Australian Aborigines made extensive use of the paperbark for bandages, garments, sleeping mats and for wrapping food for cooking. It was even soft enough to line the inside of babies’ baskets. The Aborigines built shelters called Bayu (pronounced Ba-Yoo), using overlapping sheets of bark to cover frames of bent ‘wait-a-while’ canes, so called for their hooked spines. A small fire was set outside the shelter which, combined with the scent from the paperbark, produced a mosquito repelling smoke. Once you’ve experienced its lemon scented perfume, you’ll never forget it.

The paperbark was also important for Aboriginal medicinal, symbolic and spiritual use. Some clans used the leaves for their anti-bacterial qualities. Some for smoking ceremonies to cleanse, heal or dispatch harmful spirits. The distilled essence, known as Tea-Tree oil, is available over the counter at pharmacies today for the same purpose. It was standard issue to World War II soldiers for its wide spectrum use as a mouth wash, antibacterial, anti-fungal lotion, and insect repellent, among other things. It’s a stock standard in my medicine cabinet as well. Smudge sticks made of melaleuca are sold in some alternative lifestyle shops to repel harmful spirits. The bark was believed to possess natural spiritual and magical properties.Bodies were wrapped in paper bark for Aboriginal funeral ceremonies. Imagine that. No negative impact on the environment.

Sometimes I think  we’re barking up the wrong tree.

Old ways have endured for hundreds of years because they were effective. I’m not idealising the past but merely posing a question. Perhaps we should be growing the melaleuca tree for the funeral industry as an alternative to the expensive and environmentally unfriendly coffins currently used? Tea-tree oil endures because it’s effective and economically productive. Who knows what other uses we might find for the wonderful paperbark tree? The argument for their viability will be: will they serve at the capitalist altar?

22 responses to “Barking Up the Right Tree”