Have you ever noticed how being ‘away’ allows contemplative space for contrasts and comparisons? Familiar things look different from afar.

Such was the case when I took a five hour plane trip to Perth, on the other side of our vast continent; then drove for three hours to the south west coast of Australia. The Margaret River region on the southern tip of Western Australia, is famous for two things: surfing and wine. But that’s not why I chose to travel there.

I went because of family – the best reason of all. Exploring that beautiful part of the world was an added bonus. My sister, her husband and I, went to visit their son (my nephew) who is head chef at one of the popular wineries: Will’s Domain. Most of the big wineries there have restaurants showcasing their wines amid the vineyards.

After carving out a career for himself in the top eateries in Melbourne, my nephew now presides as head chef at Will’s Domain where he gives full expression to his creativity, making a name for himself on the national culinary scene.

You can be forgiven for thinking you’ve come across a food blog by mistake. But no, bear with me,  this post is still about growing things.

After overseeing a magnificent degustation lunch for us on the day we arrived, he then acted as tour guide on subsequent days, as we explored the region. I marvelled at the native flora;  the abundance of grass trees and different kinds of eucalyptus, to what we have on the east coast. Most of the wineries have beautifully groomed surrounds with old favourites like Hydrangea, Day Lilies and Roses interspersed with Australian natives such as the distinctive Kangaroo Paw.

We visited the Providore with its extensive raised garden beds growing a variety of edible crops like strawberries, artichoke, egg plant and lavender – yes lavender! Many flower varieties are used in cooking or for decoration. Inside, they sold all kinds of interesting produce from around the region. And ahhh, there was the nougat factory! Need I say more?

The wild ‘plantscapes’ enchanted me the most. Colourful sedge, grasses, low shrubs and trees and even mosses, hugged the rugged shorelines. 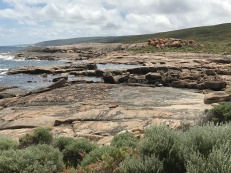 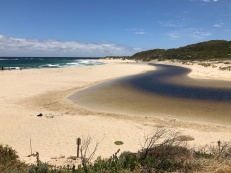 How different the climate was to the one at home. There, on the edge of the Indian Ocean, with nothing in between us and Mauritius, a dry hot Mediterranean climate prevailed in contrast to the humid subtropical environment of the east coast. Even so, many of the same species flourished. The European varieties like olive trees, hydrangea and the native eucalypts, banksias, paperbarks among them.

Given basic needs it’s possible to exist and even thrive outside of a native environment.

I wondered how basic was the need then for human connection? So far from home, my nephew had a staunch circle of friends and colleagues to fill his human need for connection. But I like to think our visit was special for offering the love and regard of a family connection; people who really knew him, who shared his life history. So far from home, and despite the presence of extended family, I re-evaluated my own need for immediate family connections, and saw them for the crucial sustenance they give me.

‘Coming back to where you started is not the same as never leaving.’
― Terry Pratchett, A Hat Full of Sky