I’ve always coveted the lacy maidenhair fern although I’ve had mixed success growing them. Adiantum spp, or maidenhair is a sought after variety. The word Adiantum comes from the Greek adiantos, which means ‘unwetted’ and refers to the way that maidenhair fern fronds repel water. Who hasn’t delighted in the way pearls of water and light spill from their dainty fronds ? There are over 200 species of these age old favourites, together with numerous cultivars.

I think I have loved and lost more than my fair share of them.

The Burke’s Backyard website describes them as: ‘Finely foliaged, evergreen plants, that can grow to 1 metre in height (about 3′) but are more commonly smaller growing. Maidenhair ferns grow from underground rhizomes and have brownish/black leaf stalks from which the fronds unfold to display their apple-green leaflets.

The range of leaf shapes and growth habits is staggering. Foliage comes in all forms and sizes, some fine leafed, others variegated, and some scalloped. Some species are certainly tougher than others.’

But they can be a little difficult to grow. The problem seems to be mostly a watering and light one – either too much or too little of either or both.

Imagine my delight when little ‘fern-lets’ began to spring up in unexpected places, and without any help from me! Perhaps spores from my potted ferns drifted across the garden and landed in places conducive to their flourishing. Or maybe they were introduced with bags of soil I used for building up my garden beds.

Whatever the case, these clever little plants have recognised prime real estate for thriving, often enhanced by unfamiliar companions, and have sprung from between pots, pavers and retaining-wall gaps. It seems I’ve loved, lost but also found these beautiful ferns again in the most surprising places.

Baby ferns springing up from between pots 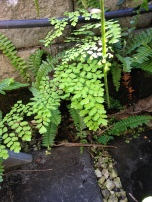 Others squeezing between wall cracks

So I ask myself: what can I learn from their example? Persistence, resilience, the value of serendipity, of being in the right place at the right time?

Mmmm. Certainly not the last. That wouldn’t account for all the spores that failed to thrive because they’d landed less fortuitously (now there’s another lesson).

I think my lesson here is the possibility of thriving in unexpected places and situations. I’ve found conditions for flourishing can come in unfamiliar forms, and sometimes in the most surprising places.

“It is strange how new and unexpected conditions bring out unguessed ability to meet them.”
― Edgar Rice Burroughs, The Warlord of Mars